Baguio City and the Filipino Mentality 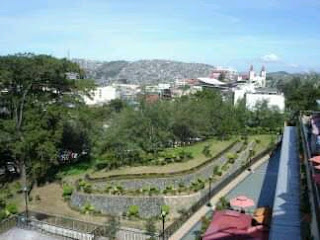 Baguio is a medium-sized city situated in the northern part of the island of Luzon, the northernmost island of the archipelago, in the province of Benguet.

There are several things that make Baguio a unique place:

The city was developed as the American colonial summer capital, according to a plan composed in 1905 by the American architect-planner, Daniel Burnham.

The reason why the area where Baguio is situated was chosen to build the "summer capital" is because of its cool climate, as the city is situated about 1,470 meters above sea level and, because it has a particular microclimate that makes it conducive for the growth of its signature symbol: the pine tree (or what I call the Filipine tree...) which is a rather unique thing for a tropical country.

THE "GARDEN-CITY" OF THE PHILIPPINES

The area surrounding Burnham Park, a vast green area situated in the very middle of the city, really resembles a garden-city.

Burnham Park is not the only park in downtown Baguio: there is also Wright Park and quite a few others that really give the central area of the city a garden-city vibe.

A FITTING METAPHOR OF THE PINOY MENTALITY

Yes, Baguio is way different from the rest of the country, because it is much greener and because it offers the opportunity to find some concealment from the unbeareably hot tropical climate of the coast and, unlike most cities and towns in the Philippines, Baguio has a measure of urban planning because it was intentionally designed to become what it partly still is, namely some sort of garden-city.

Unfortunately, at least from my standpoint as a Western tourist, Baguio looks like a city that, because of the "Pinoy mentality" has largely missed the opportunity to become the garden-city that was supposed to have become, and, most of it, looks pretty much similar to the rest of the Philippines.

The people of Baguio were offered the possibility to live in an orderly city but the Filipino mentality turned the order into chaos and much of the city, outside the beaten tourist track, is quite messy.

My trip to Baguio (that I made after having already experienced a few years of being in a relationship with a Filipina) strengthened my mental picture of Filipinos as people who complicate their lives unnecessarily even when they are offered the possibility to live a more straightforward and easy life on a golden plate.

Some Filipinos here in my country have employers who esteem them and pay them well and yet, as I said many times, too many Pinoy here end up broke and the possibilities they are offered to live a more "orderly" life with savings to tap into when life gets tough go down the drain and they find themselves living messy lives.

Obviously generalizations are never in order and I know a few Filipinos who bought a house here and do have savings but most don't and I am talking about people who have been working here for 20-30 years and who came here when the economy was still thriving.

In much the same way as the inhabitants of Baguio City mismanaged their city, and instead of improving on the foundation that had been laid by the Americans who designed the city, turned many parts of it into something that is very far from being a garden-city, many (not all of course) expatriate Filipinos who have had all the possibilities in the world to improve their socio-economic condition have made no progress whatsoever.

Filipinos are, by and large, not masters at creating added value, at least socio-economically.

If you marry a Filipina there is a chance that your financial house will end up like Baguio City.

On the flip side other qualities of your Filipino spouse can make you a better man: their way of taking care of their families, their gregarious way of life, their hospitality and their sense of laughing away at tragedies could create added value in your level of humanity.

It is a matter of deciding what matters the most in your life.