How to Deal With your Filipina's In-laws 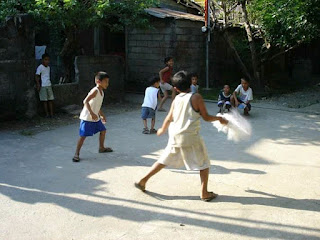 Here in Rome there are at very least 50,000 Filipinos most of whom are not here on their own.

Large portions of the population of such towns as Balayan, Batangas or Candon, Ilocos Sur, just to mention a few, have moved to Rome and they have carried the Filipino in-laws culture with them.

So an Italian who marries a Filipina who lives and works here is highly likely going to become part of a giant iceberg of which his wife is just the tip.

I spent the past ten years living with my wife's extended family (which is one of the few here in Rome that is not so big) and, for about 5 years, I really struggled to create rapport with them and how to deal with my Filipino in-laws became a crippling problem for me which had become so corrosive that it had started to eat away at my marriage.

In dealing with my Filipino in-laws I found myself in the situation described in a book I bought in the Philippines some 9 years ago, entitled "Culture Shock Philippines" by Alfredo and Grace Roces: "what choices do I have....when the queasy feeling of uselessly groping for a bridge begins to make me tremble and I find myself utterly sealed away.... what do I do?".

I found out that the answer to the question is: YES I DO HAVE A CHOICE and the choice is to first of all determine IF MY ATTITUDE TOWARD MY WIFE'S EXTENDED FAMILY SOMEHOW TRIGGERED MY IN-LAWS' STANDOFFISHNESS AND HOSTILITY.

I began asking myself "have I ever told or even implicitly suggested to my wife that her parents shouldn't be interfering with my family life? Do I look at them with a frown on my face when they seem to intervene in my family affairs?".

In the Filipino culture the extended family does interfere in their married offspring's life, this is deeply entrenched in the Filipino mentality (see the caption below the picture above).

As the "Culture Shock Philippines" book says, I had become the frustrated and antagonistic foreigner who was retreating into the protective shell of his culture and "bashing the habitat that I myself had chosen to inhabit".

Although I was going to great lengths to learn about the Filipino culture and language in order to build rapport with them, deep down I was harboring feelings of hostility and, even though I was trying to hide those feelings, I was inevitably projecting them outward. Because the extended family could sense that I was trying to edge them out or, at least, trying to set limits to what I was perceiving as "unwarranted interference" on their part, they were treating me in kind.

I had become well versed in the language, the history and the literature of the Philippines but I had not quite mastered the psychology of how to deal with the Filipino in-laws culture shock effectively.

My relationship with my wife's kin-group only began to change when I STOPPED BLAMING THEM FOR BEING HOSTILE AND STARTED TAKING RESPONSIBILITY FOR HOW THEY WERE TREATING ME.

To further cement this idea let me offer you a few ideas I learned from one of America's greatest psychologists, Dr. Wayne Dyer, in his book "The Power of Intention".

"What you feel is wrong or missing in these relationships is an indication that something is amiss within you, because broadly speaking, anything you see in anyone else is a reflection of some aspect of you—otherwise you wouldn’t be bothered by it, because you wouldn’t notice it in the first place...... If your inner speech centers on what’s annoying about them, that’s what you’ll notice. As much as you’re inclined to blame them for your annoyance, it’s yours, and it’s coming from your thoughts. If you make a decision to put your inner attention, your life energy, on something quite different, your relationship will change. In your thoughts, where your family relationships exist, you’ll no longer be annoyed, angry, hurt.....................Being authentic and peaceful with your relatives is only a thought away"- from Wayne Dyer's "The Power of Intention" chapter 9: "It is my Intention to: be Authentic and Peaceful with all of my Relatives"

Although I had spent years trying to learn Tagalog and become familiar with the Filipino culture to very little avail, it only took me a MENTAL SHIFT to turn things around and in ONLY A FEW MONTHS I experienced the truthfulness of the statement "Being authentic and peaceful with your relatives is only a thought away".

In my post about "acceptance" in an interracial intimate relationship https://buildingfilipinowesternbridges.wordpress.com/2019/09/19/acceptance-one-of-the-keys-to-a-happy-interracial-marriage/ I partly said "there are aspects of your partner's culture, habits, values and so on that might never change and this is certainly true in a multicultural intimate relationship.

Certain ethnic groups, such as Filipinos, are so set in their ways and their values that trying to get them to change their core values about what constitutes a family and the role of the extended family, for example, can create a lot of friction and frustration and can get their Western spouses to "bash the environment that they themselves have to inhabit" (as the "Culture Shock Philippines" book, that I keep quoting, says).

Now this expression "bashing the environment that they themselves have chosen to inhabit" is very interesting because it points to the core dysfunction of many interracial intimate relationships (and of other kinds of relationships for that matter).

Bashing the environment that you have chosen to inhabit amounts to resisting reality. The reality is that you knew that your future spouse was a foreigner, you knew that he or she had very different core values, but you decided to go ahead anyways and marry that person and now you are resisting that reality.

What causes much of our suffering is when we resist reality.

Similarly what causes many Westerners to get mad at their Filipino, or otherwise foreign, spouse is not the fact that he or she is culturally different, rather is their resistance to their partner's different reality".

So removing resistance and hostility toward the Filipino in-laws culture and practicing acceptance is vital if your Filipina is deeply entrenched in this mentality.

But much more is involved in getting them to love you and open arms and hearts.

If you simply part with the idea of edging them out of your marriage, you may get them to have a "neutral" attitude toward you and you will manage to remain in peaceful terms with them.

Relationship experts say that another key to a successful marriage is appreciation, not just acceptance, for without appreciation acceptance becomes mere (and perhaps even reluctant) tolerance.

So you need to go the extra-mile and, instead of just accepting the kin-group as an inevitable price to pay to have a Filipino wife, learn to appreciate the differences between the Western concept of family and the Filipino one as exciting and interesting.

I keep dwelling on the idea that here in Italy many elderly people often die alone and forgotten while the Filipino in-laws culture or extended family culture is such that this kind of scenario is highly unlikely.

This will get you to be much more than just "at peace" and you will have won the entire kin-group as your allies.

How do you balance winning the love of your extended family with not being treated as the rich Westerner who is supposed to provide everything for everyone who belongs to "big family"?

Again, based on my experience, it much depends ON YOUR ATTITUDE TOWARD THEM.

If, somewhere along the line, you taught them (directly or indirectly) that the extended family is a BURDEN to you and that you want to SET CLEAR BOUNDARIES with them they may have NO FEELING for you and only see you as the RICH WESTERNER TO TAKE ADVANTAGE OF AND THE MORE YOU GIVE THEM, perhaps just to please your wife, the more THEY WANT AND THEY WILL NOT EVEN SAY THANK YOU.

If, however, you endeavour to view them as your friends and allies and go the extra mile to show them that you HAVE NO HOSTILITY FOR THEM, THAT YOU ARE GOING TO GREAT LENGTHS TO EMBRACE THE FILIPINO KIN-GROUP CULTURE, they will BEGIN TO TREAT YOU AS A FAMILY MEMBER AND AUTOMATICALLY STOP WALKING ALL OVER YOU.

THEY WILL BE THE ONES TO SET BOUNDARIES AND YOU WILL NOT NEED TO SPEAK UP TO GAIN RESPECT AND GET THEM TO STOP CROSSING THE LINE.

Psychologists and relationship experts talk about the three As that create amazing relationships being Acceptance, Appreciation and Acknowledgement.

This is not just fluffy wishy-washy theory, especially in a relationship in which there is a deep cultural chasm between husband and wife.

My personal experience shows that the only way to build and shore up a bridge over this deep cultural chasm is by dropping resistance and replacing it with acceptance and then going even further by figuring out ways to learn to appreciate the Filipino in-laws culture.

I did it and, as a result, I am experiencing a beautiful and harmonious coexistence with the Filipino in-laws culture.
Labels: Filipino Mentality Married to a Filipina