Should You Marry a Young Filipina? 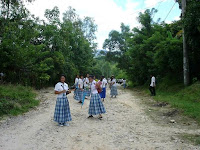 Some 15 years ago I was in a Northern European country, to visit some Filipino friends of mine.

While there, I met a Filipina in her mid 30's who was married to an old Western man.

She talked very enthusiastically about the advantages that had accrued to her in terms of the financial stability she had gained and of how, by becoming the wife of a Western citizen, she had finally managed to get the residence permit in the country, after spending years in a state of clandestinity.

What she never mentioned is whether she had feeling for the man or not.

Although I don't know the whole story, the fact that she only mentioned the legal and financial advantages of being in that kind of relationship, seems to tell me that there is a risk that if you are old and single, as well as relatively well-adjusted financially, and look for a much younger Asian lady, you might bump into someone who is not exactly looking for somebody to share her unselfish and unconditional love with.

Each situation is different of course, and there might be young Filipinas who marry an old and wealthy Western man with the right motive and not for selfish gain.

However I'd suggest that, if you are contemplating the idea of visiting the Philippines to find a young exotic girl, you weigh your decision very carefully.

Before I started courting my wife I made sure that there was no hidden motive behind her interest in me. I found out that she comes from a family of college teachers and she was a teacher herself. They have a large home in the Philippines and a sideline family business that would allow her to be financially independent should she move back to the Philippines.

Actually, when we got to know each other she was making plans to go home to the Philippines for good.

So, it became quite clear to me that she was not seeking financial security and she is not even much younger than I am.

So, the point I am trying to make here is: before you embark on a trip to look for the ultimate exotic woman, make sure that there is no possibility that your marriage will turn out to be a TRANSACTION IN WHICH YOU TRADE AN ENTRY VISA IN YOUR COUNTRY FOR SCRAPS OF LOVE AND SEX.

The only real key to getting love is by putting it out. We get back from another person what we project outward and if you enter a relationship with a Filipina because you are starving for affection and she is starving for financial security your marriage will be a place where TWO STARVING INDIVIDUALS TRY TO STEAL EACH OTHER'S FOOD.

To me a thriving intimate relationship is a place where two emotionally mature people mirror to each other the positive emotions that they personally cultivate.
Anything short of that is a relationship that is not worth having.
Labels: Married to a Filipina