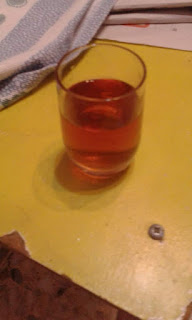 If you marry a Filipina and begin to interact with her Filipino relatives and friends, it will not be long before you discover that the practice of drinking alcohol in a group or inuman is very widespread in the Philippines as well as among Pinoy abroad.

Almost every Filipino social gathering features the "for the boys" tradition, where the men separate themselves from the rest of the group and engage in inuman.

What this entails is basically this: a group of boys (it is typically the men who engage in this practice) sits around a table that is situated few meters away from the area where everyone else is singing karaoke, dancing, eating or doing kwentuan (or chit-chatting) and they lay a few bottles of beer, gin, brandy or other kinds of alcoholic beverages (mostly hard drinks).

And while they are sipping they snack on some food (usually pieces of meat) called pulutan.

As I often mention in my posts, Filipinos are very social and like spending hours talking and gossiping.

Filipino women seem to be more inclined toward tsismis or gossip (not always malicious gossip, most of the time it is just a harmless sticking of their nose into other people's affairs).

Men in the Philippines, on the other hand, only seem to know two kinds of conversation: the mabuting usapan (literally the "good conversation" meaning, I guess, a conversation centered around a topic) and the maBOTEng usapan, bote meaning "bottle" (of gin of course) which is a conversation that has no specific topic, rather it is just an opportunity for drinking.

I remember walking down the main street of my wife's barangay and noticing that early in the morning men were seated either on the side of the road or in front of their homes and, because they knew I could speak Tagalog, they would say to me: "kwentuan tayo" ("let's chat") and, because I had already acquired some experience with the Filipino community here in Rome and I was already rather acquainted with the two possible types of conversation Filipino men engage in, I would ask: "ito ba ay isang mabuting usapan o isang maBOTEng usapan?" at which they chuckled and pulled out a bottle of Ginebra San Miguel to make it clear that 99% of the times the usapan is a maBOTEng one!

The average consumption of alcohol in the Philippines

According to a survey "binge drinking" or inuman among currently drinking adult Filipino males was at 64.4 percent, while it was 31 percent for females. Current drinkers are defined as those “drinking alcoholic beverages in the past 30 days” prior to the study" (https://www.philstar.com/headlines/2019/08/27/1946753/survey-more-half-pinoy-adults-are-binge-drinkers#epxWFlAOig3AHo7Z).

The above mentioned survey talks about 64% of Filipino males as being regular consumer of alcohol.

My impression is that the percentage is even higher, at least based on what I personally observe.

The Tagalog expression for "much" or "a lot" in Tagalog is marami while the word for "a little" is kaunti.

"Just a little" is kaunti lang.

However, when it comes to wines & spirits, Filipinos use the expression kaunti-"container" which tells you everything about the "average" consumption of alcohol per capita in the country.

For Filipinos abroad, especially those who live in cold countries, the container is even larger as in cold climates that Pinoy are not familiar with, Filipinos need maraming "pampainit" ("heater").

History of alak in the Philippines

Before the Spanish colonized the Philippines, the Arabs and the Chinese were already actively doing business with Filipinos.

It seems that alcohol was introduced in the Philippines during that period.

Apparently the Tagalog word “alak” comes from the the Arab word arraq.

And it seems like exposure to the Arab liquor got Filipinos to start their own production of alcoholic beverages.

Basi a popular drink in the Ilocano Northern regions, is distilled from sugar canes.

If you visit the Philippines you will see San Miguel products everywhere, from Ginebra or gin to San Miguel beer.

Over time other companies like Tanduay, a factory that produces rum, cropped up in the archipelago and to this very day the production of all sorts of alak thrives in the Philippines.

In the Philippines you can find all sorts of alcoholic beverages: from light San Miguel beer to strong Red Horse beer, from Ginebra San Miguel gin to Tanduay rum, Cuatro Cantos, you name it.

Two of the Filipino songs that I used to listen to at the start of my journey with the Tagalog language are "Leron Leron" and the one that goes "nanay, tatay gusto kong tinapay. Ate, kuya gusto kong kape....lahat ng gusto mo ay gagawin ko"

It seems like the lyrics of "nanay, tatay gusto kong tinapay..." need to be slightly modified, based at least on what I am reading in this article

The article says, in part:

"The cases of alcoholic drinking among the youngsters [between the age of 13 to 21 years old] have reached an alarming level compared to the recent past,”

This is indeed very alarming. “Philippine law sets the minimum legal drinking age at 18 but underage drinking is widespread,” wrote Joyce P. Valbuena in a report for Health Action Information Network (HAIN). “Most young people get alcohol from home with or without their parents’ permission. They know how to obtain alcohol—they are able to get it from friends or they can discreetly buy for themselves.”

What is even more alarming is the fact that more and more youngsters are now drinking than in the recent past. In a survey conducted by the University of the Philippines, 60 percent of Filipino youths today are drinking alcoholic beverages.

Even at a young age, Filipino teenagers are already drinking. A study conducted by the East-West Center (EWC) in Hawaii showed 11 percent of boys began to drink by age 15. Only 4 percentof the girls commenced to drink at that age

Ang "Presidente" and ang "Emperador": who really rules the Philippines?

The Philippines is a republic and it has a president. Yet, under certain aspects it is similar to ancient Rome.

Rome, the city I live in, used to be an empire and it used to have an emperor.

Well, although the Philippines is not an empire and it has a president, it also has an Emperador or emperor and the emperor is definitely higher than the president.

Why? Because ang Presidente ay nakaupo sa palasyo samantala ang "Emperador" (brandy) ay nakatayo sa mesa or the president seats in his office while the Emperador always stands on the table.

Now, it stands to reason that the one who stands is higher than the one who sits, therefore there is no doubt that ang Emperador ay mas mataas kaysa (higher than) sa Presidente and all the more so because mataas ang leeg or it has a long (bottle)neck.

Emperador is not a person or a title, rather it is a popular brand of brandy in the Philippines. The Spanish brand Fundador is also very popular.

That is why the Emperador has more influence on some Filipinos than the president himself.

As for pampatulog and pampagana I am honestly a little confused:

If I need some pampagana I'd use some coffee

How do Filipinos reconcile that? Only Filipinos know....

The Philippines: a land flowing with alak

Ancient Israel was named a "land flowing with milk and honey".

In Tagalog that would be "gatas at pulot-pukyutan".

Well, based on what I have mentioned in my article, it can be said that the Philippines is a land flowing with alak at pulot-pulutan!