Tagalog is one of the major languages spoken in the Philippines.

It is spoken in Metro Manila and in its neighboring provinces, like Batangas, Laguna, Cavite, Bulacan and others. 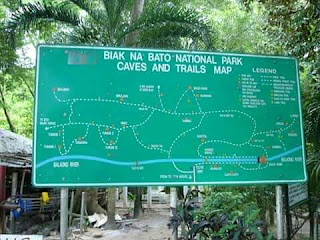 A National Park in the province of Bulacan, one of the Tagalog speaking provinces of the Philippines

Tagalog is an Austronesian language, a language family comprising languages spoken in the Malay Peninsula, in South East Asia, in Taiwan, in the islands of the Pacific Ocean and in Magadascar.

Tagalog, like most Austronesian languages, is an agglutinative language.

An agglutinative language is characterized by words that are made up of different morphems (morpema in Tagalog), a morphem being the smallest part of a word having a meaning of its own (like, for example, the English word doable: if I separate the two morphems, do and able each of them has a meaning of its own and can stand on its own)

Generally words in Tagalog are formed by combining a "salitang ugat" or "root word" with one or more "panlapi" or affixes.

There are three types of affixes in Tagalog:

For example, I could combine the "root word" talino, which conveys the idea of "intelligence", with the affix ma to form the adjective ("pang-uri") matalino (intelligent).

In this case the "affix" or "panlapi" is called "prefix" or "unlapi", because it occurs before the "root word"

"Prefixes" can also be used to form verbs, like, for example, the verb magbasa (to read) and nouns like inapo or katrabaho, kaibigan etc.

The "gitlapi" is an affix that goes in between the root word.

A typical example is the verb "kumain" (to eat), where the "um" affix goes between the first consonant and the first vowel of the root word "kain"

The "hulapi" occurs at the end of the root word. A typical example are the -in verbs like "basahin" (to read) or such nouns as "aklatan" (library).

The challenging thing in Tagalog is that there are way too many affixes.

I have glossed over the concept of focus in Tagalog and the various affixes in my post http://www.filipitaly.com/2020/08/the-tagalog-language.html.

However in the coming posts I'll cover the various affixes in more detail.