Verbal Aspect vs Tense in Tagalog 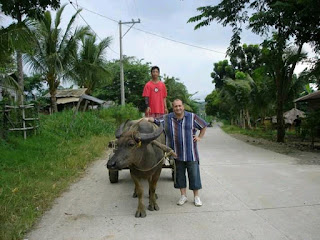 "Sumakay ako sa kariton": then I got down to take the picture above. If I said "sumasakay ako" I'd mean that I am still on the kariton

There are Filipinos who use the expressions "kapanahunan ng pandiwa", which is the Tagalog term for "tense", and "aspekto ng pandiwa" interchangeably.

But are "tense" and "aspect" the same thing?

Are there real "tenses" in Tagalog, and in the Philippine languages in general?

In reality in the English language only the past and the present are, strictly speaking, "tenses" in the real sense of the word, as past and present deal with time.

The "simple", the "continuous" and the "perfect" don't deal with "time", rather they deal with "how" the action is done and they tell us about the speaker's perspective about the action.

If for example I say something like "I am living in Rome", what I am saying is that "right now" I live in Rome but this might not be the case in the future.

If I say "I have lived in Rome" I am kind of looking at the past from the point of view of the present and I am conveying the idea that "up until now Rome has been my home but now I might start taking a different direction".

So, in English, "tenses" talk about past and present or, in other words they deal with with time, but one can talk about time from different perspectives and use "aspects" of the past and the present.

In Tagalog there are no "tenses", there is only "verbal aspect".

If I say "kumain ako", I am using the "completed aspect" and I am, therefore, talking about an action that has been completed.

"Kumakain ako" is similar to the "continuous aspect" in English and refers to an action that is "in progress" (or that was in progress in the past if, for example I say something like "kahapon, habang kumakain ako, dumating ang pinsan ko"="yesterday, while I was eating my cousin arrived") but it has nothing to do with past or present.

"Kakain ako" is the "contemplated aspect": if I say "kakain ako" I am stating my "intention" to eat, I am "contemplating" the action but I am not doing it right now.

So "kapanahunan" and "aspekto" are not the same thing and in Tagalog there is only the verbal aspect and there is no such thing as tenses.