Many Filipinos, as well as Westerners, wonder why I went to great lengths to study Tagalog, and my wife herself sometimes argues that my investment of time and energy to go deep into the Tagalog grammar is a waste of time.

But I beg to differ. I actually believe that going deep into my wife's native language, not just dabbling at it, is a major key to succeeding in this kind of relationship.

It is key in any multiethnic relationship and it is much more so if your wife is Filipina.

But while learning Tagalog well is extremely important in this kind of marriage, in terms of how it is a huge rapport builder (not only with your wife but also with the extended family, which is the core element of the Filipino culture), it is better to stick to English when you are having deep conversation with your Filipina wife (provided, of course, that she speaks English very well, which is highly likely if she has higher education).

The reason why it is good to know the Tagalog language, but it is better to communicate deep and intimate things in English, is because Tagalog is not a very nuanced language and it has a rather limited vocabulary, much of which is made up of loan words.

You won't find Filipinos who study science or philosophy in Tagalog for example.

As I mentioned in my other blog www.italpinoy1967.wordpress.com, an example of how Tagalog is less nuanced than English is how you tell the difference between a spouse who is just being "faithful" and one who is truly "loyal".

In Tagalog there is only one word, the word "tapat", that encompasses all the nuanced concepts that are related to the basic idea of faithfulness.

And if my wife hurts me, I can use words and expressions that convey the idea of a major hurt or a minor one, if I speak in English. I could say something intense like “you stabbed me in the back” or something milder like “you peeved me”. In Tagalog I know of no other expression than “sinaktan mo ako” to express all the hues and shades of hurt.

Nevertheless, as I said, learning Tagalog well and coming across as someone who is going to great lengths to dig deep into the native language and the culture of his spouse pays off great dividends and here is how:

Look at the following picture 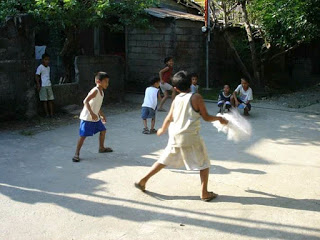 I took this picture in the house compound of a friend of mine who comes from the province of La Union.
What's interesting about this photo is that the children are playing in the inner courtyard of a house compound.
In the Philippines there is hardly such thing as individual homes, rather there are house compounds where each member of an extended family, who gets married and creates his own family, builds his own house unit while maintaining physical, as well as emotional, proximity to his parents, uncles and grandparents.
In the Philippines people view themselves not as independent agents who, at some point, get kicked out of the house of their parents and build their own life, based on their own priorities.
In the Philippines people who get married continue to live either in a literal or in an "emotional" compound with their extended family.
Filipinos who live overseas chat with their extended family day in and day out, so it is as if they lived in a house compound next to them, even if they live thousands of miles away from their kin group.
And they often do everything within their power to get their parents or their brothers and sisters to join them in the host country.
For example I used to live with my brother-in-law and my mother-in-law in the same apartment here in Rome.
Actually in some countries, like Italy, Filipinos don't really live apart from their extended family. Here in Rome most Filipino immigrants have much of their family here.
So if you are married to a Filipina, even if you live in your country, you can hardly ignore the rest of her family and you need to build some rapport with them (unless you marry one of those Filipinas who has broken away from the most traditional and strict aspects of the Filipino kin culture, and there are some, but they are relatively few).
The book "Culture Shock Philippines" by Alfredo and Grace Roces says that you could ignore this issue of building rapport and "still manage to function, but you will be ill at ease"....and I know a thing or two about what this entails....
So, because when you marry a Filipina you marry (almost literally), the entire kin-group, it is possible that your Filipina will, at some point, try to get her parents, or even her brothers or sisters, to move to your country and even live with you.
And if you move to the Philippines for good, chances are that you will live in the same compound where the entire extended family lives.


Even if your Filipina’s extended family members are fluent in English (like in my case) your effort to learn Tagalog will most certainly be viewed as an effort on your part to go the extra mile.

If you live in a big Western city that has a large Filipino community, chances are that much of your social life will take place within the circle of your wife's Filipino friends, as Filipinos, at least here in Italy, hardly widen out. 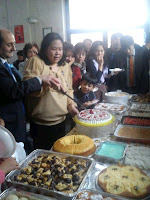 You'll be able to sense if someone is gossiping about you

As I mentioned in my other blog, another reason why you should learn Tagalog is this: I have noticed that, unlike Westerners, who only like to gossip about other people when those people are not around, Filipinos like to whisper even in the presence of the person they are gossiping about, so if you can’t understand what they say you might find yourself in the awkward situation where you are not sure if they are talking about you or about somebody else.

You'll make the most of your vacations in the Philippines

And last but not least, being able to speak Tagalog will stand you in good stead when you visit the Philippines as a tourist.

Because I speak Tagalog well, I was able to criss-cross half the island of Luzon alone and no one tried to rob me or harm me in any way, on the contrary, everyone was rather friendly, or turned friendly after an initial hostile approach, precisely because I could talk to them in Tagalog. 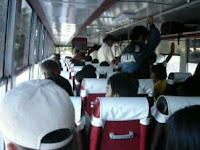 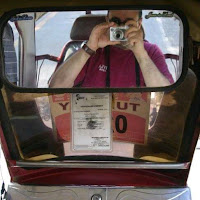 Although, as I said, my wife and I communicate in English, which is a language that enables us to have deep and meaningful conversation, I don't regret at all having spent a great deal of time learning Tagalog in a rigorous and systematic way, on the contrary, I am more than happy that I made such an investment.

My efforts are paying off immensely in terms of my ability to enjoy a friendly and loving relationship with the larger circle of Filipino relatives and friends that my wife has and who inevitably become an integral part of the life of a Westerner who marries a Filipina.

For further information about the structure of the Tagalog language I have posts in English as well as in Tagalog about this topic in this blog, as well as in www.italpinoy1967.wordpress.com.

Thanks for reading and until next time.