The "Crab Mentality" of Filipinos (from the Standpoint of a Foreigner)

Here in Rome there are some 50000 Filipinos. They constitute one of the largest groups of immigrants in the city and the Filipino community has been existing here for about 40 years.

Yet, almost all Filipinos here started out working as katulong or domestic helpers (many work live-in, meaning that they are only free on Sundays and on Thursday afternoons) and to this day the vast majority still works as katulong.

Apart from few Pinoy sari-sari store and a few restaurants (plus one Jollibee restaurant), here in Rome Filipinos seem to be one of the communities of immigrants who run the least amount of sariling negosyo (Filipinos who run some kind of business), compared to other ethnic groups. 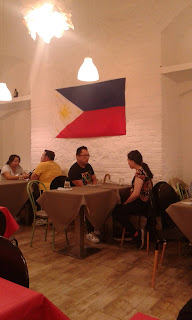 A Pinoy restaurant in Rome

Many other immigrants, like the Romanian for example, run their own businesses in such fields as construction, plumbing, electrical installations etc. The Punjabi run dozens of bakeries in town. The Chinese have hundreds of eat all you can restaurants and shops and recently they've also started running cafeterias and, in many cases, they even hire Italians.

And yet Filipinos, who have been here much longer than other groups, hardly attempt going into business or getting a job that is other than katulong. Even their sons and daughters who graduate from high school, in most cases, follow in the footsteps of their parents and become katulong themselves.

I am not encouraging setting up negosyo, I am just using this as an example to talk about crab mentality and, obviously, there is nothing wrong in being a katulong, and all the more so because a lot of Pinoy here work for rich people and some earn more than the average Italian worker, but, nevertheless, it is an actual fact that, by and large, Filipinos here tend to hold back from trying to start a business of their own or to, at least, do something different than katulong.

As Italian husband of a Filipina this phenomenon has aroused my curiosity and, since I started courting my wife over 20 years ago, I have been looking into it.

Back then my wife gave me a clue:  around 20 years ago there was a Filipina who used to run a sari-sari or grocery store. After a while she tried to set up a Filipino restaurant but, much to my surprise, very few would support her and, based on what my wife told me, it seems like the reason was that other Filipinos were telling one another not to eat in her restaurant. Whether these rumors or tsismis are true or not, the fact is that the restaurant did not stick around likely due to what my wife referred to as the so-called crab mentality, which seems to be one of the hallmark traits of Filipinos.

Basically the crab mentality works like this: if one crab tries to emerge from the bottom, others will try to pull it down, insead of trying to emerge themselves.Why does this happen so much in the Filipino culture?

The Filipino Concept of Happiness: "Masaya" vs "Maligaya"

I personally believe that what most Filipino think happiness is is at the root of many of the cultural traits of Filipinos, including the crab mentality.

As I have pointed out many times Filipinos use two words to describe happiness: they use the word masaya to basically talk about happiness induced by external stimulation and maligaya, which is namamalaging kapanatagan (inner peace) that does not depend on having a nice house, car, comfort food at Jollibee, alak or alcohol or any other external things that create a temporary state of being masaya or on a high.

The Filipino media and society, the huge karatula or billboards, TV, the internet and so on have programmed into most Filipinos the idea that they need to consume, consume, consume.

A person who is maligaya and has the inner kapanatagan, a person who chases true spirituality (vs fake religious tradition and rituals) doesn't need to tear others down.

Interestingly most Pinoy are Christians and one of the most important things that Christ taught is "maligaya ang mga palaisip sa espirituwal na pangangailangan nila.” Lit., “mga namamalimos ng espiritu.” or "happy are those who are conscious of their spiritual needs".

So, even Jesus stressed the importance of finding the happiness within, not in some external tradition or ritual (that abound in the Philippines) but in the right kind of spirituality that produces inner transformation, and yet for most Filipinos religion is nothing more than rituals that have no power to create kaligayahan.

Tsismis or gossip is very widespread in the Philippines as well as among Filipinos abroad.

Filipinos spend long hours sitting idly and engaging in kwentuan or chit-chatting and often kwentuan veers toward gossip and criticism directed at someone who has achieved more, maybe someone who has a business, or perhaps some relative who has made good money abroad who gets criticized for not having enough utang-na-loob or debt of gratitude and for not sending enough money home.

Lack of Goals and Personal Improvement

All this time that Filipinos spend gossiping could be used to set goals, attend online courses, read, meditate and do whatever else that would shift the attention away from what others are doing or accomplishing and direct it toward advancing one's own agenda and goals, because when someone is too busy working on him or herself he or she doesn't have the time to gossip or criticize.

So, yes, envy, criticism and crab mentality are very widespread in the Philippines because the Filipino culture, although Christian on the surface, is very materialistic and very directed toward achieving external things.

But, because it also promotes a lot of TV, social media, easy entertainment, gossip and other activities that don't get people to work on themselves and set powerful goals, rather than working on achieving things many Filipinos prefer to criticize others and pull them down.

This is more or less my analysis about this phenomenon called crab mentality.

As a non-Filipino I think I have an objective and unbiased perspective so I am not judging, I am just reporting, and I am interested in lifting up my fellow kababayan.