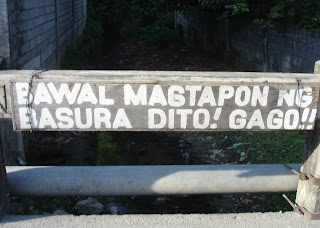 I remember riding on a trycicle with Tito Benje, my Filipina wife's uncle.

After overtaking a bus on a double solid line (as Filipinos always do), he said something along the lines of "sa Pilipinas lahat ay pwede", basically meaning that in the Philippines you can do whatever you want and that road signs and markings are, more often than not, mere decorations.

One of the features of the Philippine landscape is the huge amount of signs that remind people that urinating against a public or private wall, on a sidewalk or against a pole and disposing of the garbage on the side of the road, in a river or a canal is not socially acceptable and that the offender might (theoretically) be given a multa, should a buwaya be around.
My bayaw told me in a very straightforward manner that Filipinos love urinating and disposing of their garbage exactly there where a sign says "bawal".

Tito Benje was right: more often than not, rules in the Philippines are merrily ignored and the various "bawal" signs just embolden people to ignore them even more.

Lack of Discipline is the Product of short-term thinking

Apart from the relationship that Filipinos have with rules and laws, a lot of Filipinos don’t seem to have a lot of self-discipline in such areas as alcohol consumption, eating tsitseria (junk food), getting into debt etc.
Kaunting alak easily becomes kaunti container and I know plenty of Filipinos who, the more they are told by a well-meaning doctor to cut back on rice, soft-drinks, junk food and baboy, the more they seem to overindulge to death in those foods or drinks. So why would people with this kind of short-term thinking care about the long-term consequences of not abiding by such minor rules as "bawal umihi dito" or "bawal magtapon ng basura dito"?

The average Pinoy believes that poverty is kasalanan ng corruption and they blame it on the corrupt politicians, yet they fail to grasp that the psychological mechanisms that cause those politicians to get corrupted are the same that run the average Pinoy when he drives like a kaskasero or when he urinates or disposes of the garbage in front of the very sign that says "bawal....dito", or, on a more individual level, when he disregards the long-term consequences of trying to always be masaya by consuming tons of tsitseria or kaunting-container hard liquor, thereby showing lack of big picture understanding and long-term thinking.
The Philippines and many of its people are the perfect encapsulation of how running away from discipline (both individually and in public) backfires very dramatically.
Filipinos are looking for a shortcut, they want to be masaya right away, they seek instant gratification and take the easy route, they keep going for the easy (like urinating in the nearest convenient place or throwing the garbage in the nearest and easiest place), but the easy turns out to be something that makes life unnecessarily hard for the majority of Pinoy.
Labels: Filipino Mentality